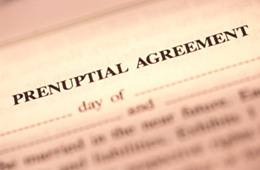 Last Friday, while I waited for my sister to show up for breakfast, I read a piece on Slate.com that kinda got my blood up.  I’ve linked it here.  If it’s TL;DR (Too Long; Didn’t Read: I totally had to look that abbreviation up on the internet) basically a woman who might become a mom wants her husband to sign a prenup style document outlining all of his responsibilities once the baby arrives.  She wants him to sign it so that after the baby comes, she won’t hate him for not living up to her expectations.  His response was pretty spot on.  He called it a prepup agreement, giving the idea exactly respects it deserves: none.

The unsaid assumption is that her husband will automatically be a lessor parent.  She bemoans the fact that he is less organized, more spontaneous.  She wants to set all the rules, yet she doesn’t want to be the boss. She wants him to automatically know what to do without telling him, yet she wants it to be exactly as she wants it done.  Warning warning, run run away Will Robinson!  Do not sign.

If this is how she wants to approach motherhood, then she will absolutely hate her husband by the end of the first year.  Moms tend to judge their husbands contributions to the workload against their own contribution. Men, no matter how much work they take on, will never ever be able to match this bar.  Firstly, moms , especially in the first year, will automatically do more for their child.  The husband can’t breast feed. Secondly, the mom will always over estimate their own contribution.  This is human nature.  It’s why everyone in Lake Wobegon is above average.  Even a 50/50 split of labor will not be so in her mind.  I’d imagine that constantly checking the husband’s contribution against the document would make her pretty miserable.  Thirdly, moms are competitive.  If she for a second thought that she was doing less for her children than someone else, she would feel terrible and immediately step up her game.  For the husband, this is a lose/lose situation.  Do not sign.

But the biggest thorn in this article for me is the assumption that husbands will be lessor contributors to their children’s upbringing and need some sort of  document to help them step up.  She seems stuck in a 1960/70’s idea of marriage and child rearing.  Mom will raise the kids and dad will earn the money.  But that is quickly changing.  Almost every couple I know takes on the effort of child rearing with equal intensity. And it’s important to remember that dads and moms contribute different things to the cause.  Most of it is intangible.  For this couple I hope that his spontaneity will provide a wonderful model for dealing with the curve balls of life.  Her focus on organization will be a great boon in teaching time management skills.  His rough play will balance out her over-protective tendencies.   I hope they allow this theoretical kid to eat dirt and run around barefoot, but also instill  the value of personal hygiene.

Dads have gotten a bad rap for a while now.  Just take a moment and think back over how dads have been portrayed in TV and movies for the last couple of decades.  Mostly they are idiots, and usually deserve and get little respect.  (Easy A is a great counter-example to this tread where most of the adults are intelligent caring human beings)  It makes for good television.  But that stereotype seeps into the way that wider culture views dads.  The piece plays into that some and it makes me wary.

I’ve found that since becoming a parent that when I read an opinion piece by someone who is not yet a parent, I tend to write it off.  It’s the equivalent for patting a precocious child who just jumped into an adult conversation on the head.  That’s cute dear, but the adults are talking.  Before I was a parent, I did my best not to have opinions about parenting for this same reason. (Or at least I didn’t voice them)  What did I know?  How could I judge other’s parenting skills?  One of the best parts of being a parent is that now the flood gates of judgmental-ism are wide open.  My brother-in-law likes to point at people and shout “I’m judging you!”.  It’s all in good fun.

The last thing this article forgets is that a baby/toddler/child/teen/etc is a new person.  S/he will have their very own theory of self and will totally shatter the perfect thought-bound system the theoretical child now inhabits. If they do decide to have children, I wish them all the best in the world, because their lives will be enriched.  But no matter what you do, do not sign that piece of paper.

Join 325 other subscribers
Follow The Podcast of Calling on WordPress.com